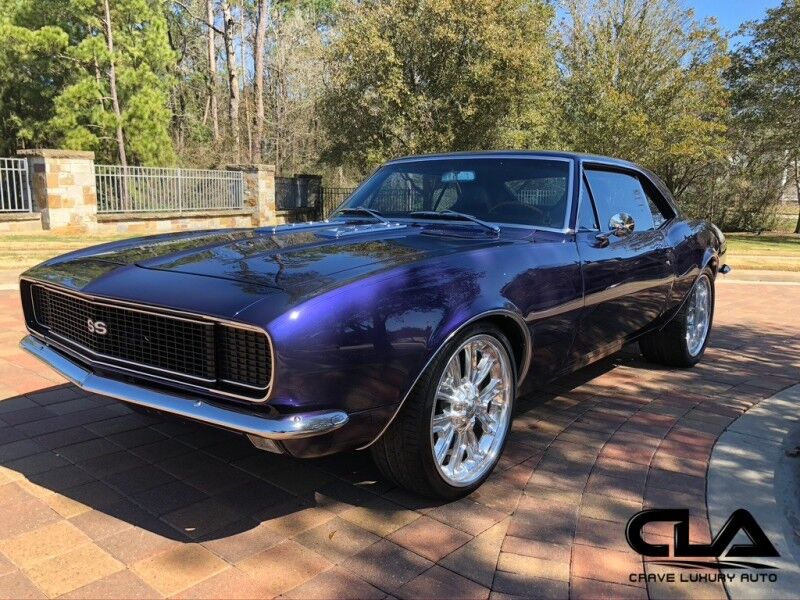 66 more images
Price
Call for Price
Call for Price
Visit Us
Crave Luxury Auto
2408 Timberloch Place, Suite C1
The Woodlands, TX 77380
Get Directions
Hours
Hours: Closed today
Phone Number: Closed today
Fax: Closed today
Full Hours
Contact Us
Our team of experts are here to answer your questions!
(281) 622-4066
Send us an Email
At a Glance
161202
123377L161202
1967
5275
Blue
Black
Rear Wheel Drive
Specs
Highlights
The Camaro was originally conceived in 1965 as Chevrolets answer to the ever popular Ford Mustang. During development, the car was first code-named as project Panther . However, just one year later Chevrolets head of public relations invited automotive journalists everywhere to join him for the first and last SEPAW (Society for the Elimination of Panthers from the Automotive World) meeting. Interestingly enough, this is credited as one of the first nation-wide conference calls. As the conference calls name suggests, the Panther moniker was dropped for the vehicle and replaced instead by a word of General Motors invention: Camaro. Managers at the time would later explain that the word is a derivative of the French word camarade: the implication being that the car would serve as a good friend to its owners. Fast forward 55 years and six generations later and it is hard to argue that the Camaro has not lived up to its name. This chassis number 161202 is one of few first generation Camaros that has been maintained in excellent condition to the present day. Furthermore, the esteemed Foose Design team from the popular television show Overhaulin performed custom work on the Camaro that includes a number of stylistic and mechanical improvements. The exterior of the vehicle received a new seal for the rear glass window, new felt window seals, and new pinstriping with Camaro logo badging. The Camaros footwear was upgraded to custom Foose designed FishTale chrome wheels with a sheen so bright you could brush your teeth in front of them. The interior upholstery has been enhanced with custom cobra seats, custom fabricated brackets to extend seat location, and Dynamat sound dampening material. In addition, a new carpet, carbon fiber dashboard, and new two tone leather interior designed by Chip Foose himself are featured. A Hotchkiss performance suspension kit with front and rear sway bars, springs, control arms, and bushings is the first of many mechanical refinements. Other tune-ups include a Magnaflow dual exhaust, power windows, updated insulation and line arrangement, and a rebuilt steering box. Classic cars dont often come with such well-established pedigrees, and this Chip Foose original restoration is surely in a class all its own. Specs: 383 cubic in. V8 bowtie block engine with 510 horsepower, Manual Tremec 5-speed transmission, Serpentine timing belt, Corvette fuel injection system, Rally sport grille, Wooden steering wheel, Carbon fiber seats, Dynamat sound dampening, Foose FishTale wheels, Cobra seats, New carpet, Chip Foose two-tone leather interior design, Hotchkiss performance suspension kit, Magnaflow duel exhaust, Power windows, Wilwood 6-piston vented front disc brakes, Chrome rear bumper, Chrome wheel wells, SS graphics, Autometer instruments, Tinted glass, Air Flow research heads, Focal speaker system, JL audio amp, Ford 9 in. locker rear end, Hurst shifter, Spoiler.
…
Interested in this vehicle?
This vehicle has many great features, but we understand that you still may have questions. Please use the form below to request additional information and we will respond with all the answers you need.
All pricing and details are believed to be accurate, but we do not warrant or guarantee such accuracy. The prices shown above, may vary from region to region, as will incentives, and are subject to change. Vehicle information is based off standard equipment and may vary from vehicle to vehicle. Call or email for complete vehicle specific information.