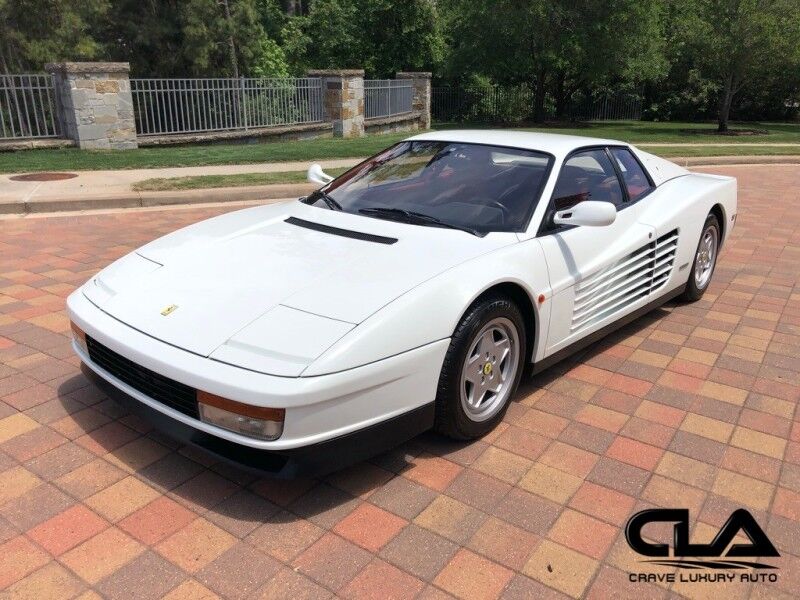 Visit Us
Crave Luxury Auto
2408 Timberloch Place, Suite C1
The Woodlands, TX 77380
Get Directions
Hours
Hours: 8:00 AM - 6:30 PM
Phone Number: Closed today
Fax: 9:00 AM - 6:00 PM
Full Hours
Contact Us
Our team of experts are here to answer your questions!
(281) 622-4066
Send us an Email
At a Glance
085305
ZFFSG17A7L0085305
1990
13956
White
Black
Rear Wheel Drive
Specs
Highlights
Produced from 1984 to 1991, the Ferrari Testarossa may have never participated in a racing event, but its frequent appearances in popular culture artifacts such as Miami Vice and ownership by big name celebrities including Jordan Belfort, Mike Tyson, and Elton John established the Testarossa as a symbol of the 1980s era. Originally debuting at the 1984 Paris Auto show, the Testarossa would eventually see 7,177 models produced. The cars name comes from the 250 Testa Rossa racing sports car that won the World Sportscar Championship in 1957. Testarossa means red head, which is a reference to the red-painted cam covers on its 12-cylinder engine. The Testarossas calling card feature is the side strakes that run along either side of the vehicle. Although originally placed there to conform to rules in several countries outlawing large openings on cars, these strakes are undeniably the Testarossas most stylistic element. While the Ferrari Testarossa might not be capable of transporting drivers back to the future like Marty McFlys flux capacitor fitted DMC Delorean, it does a great impression of teleporting you back to the past. This chassis number 085305 sports a rare white exterior paint reminiscent of the popular 80s crime drama: Miami Vice. It has a naturally aspirated 4.9 L longitudinally mounted Tipo F113 flat-12 engine located in the rear midsection of the car to improve stability and cornering. The Testarossa is the last Ferrari model to contain a flat-12. Its also controlled with a 5-speed manual transmission. The exterior of the car is ornamented with Ferrari Scuderia shields. Its wheels feature Ferraris standard 5-bolt pattern, a change from the single bolt setup of earlier models. Ferrari tire caps make the wheels pop in a way incomparable to later Ferrari models. Furthermore, the cars now extinct sliding seat belts and well-maintained Ferrari floor mats provide a distinctly retro feel. It received a full engine-out belt service 500 miles ago in August 2018 and remains in immaculate shape. The 077325 may be outdated as far as speed is concerned, but it carries a swagger that modern models struggle to recreate. Specs: Naturally aspirated 4.9 L Tipo F113 flat-12 engine, 5-speed manual transmission, Rare white exterior paint, 5-bolt pattern wheels, Pioneer stereo, Independent, unequal-length double wishbones, Coil springs, Twin telescopic shock absorbers, Twin side radiators, Wider rear-wheel track, Belt service 500 miles ago.
…
Interested in this vehicle?
This vehicle has many great features, but we understand that you still may have questions. Please use the form below to request additional information and we will respond with all the answers you need.
All pricing and details are believed to be accurate, but we do not warrant or guarantee such accuracy. The prices shown above, may vary from region to region, as will incentives, and are subject to change. Vehicle information is based off standard equipment and may vary from vehicle to vehicle. Call or email for complete vehicle specific information.