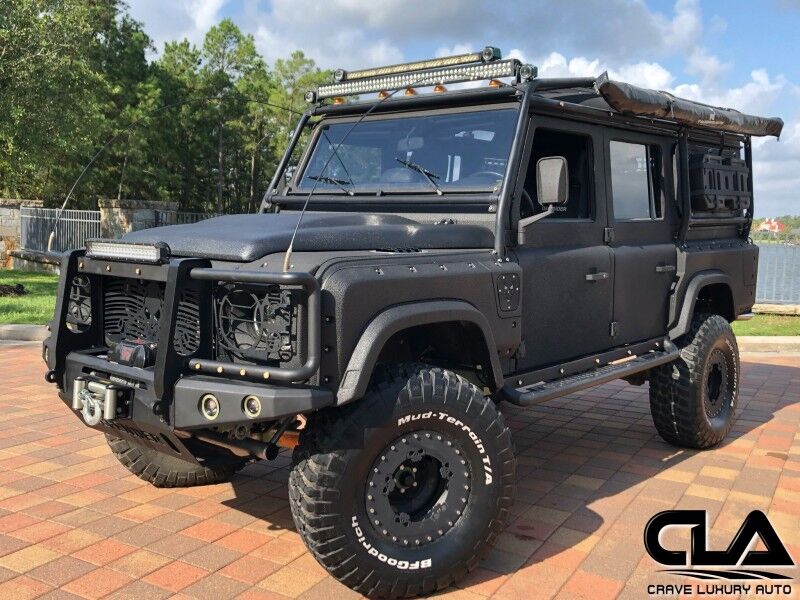 Visit Us
Crave Luxury Auto
2408 Timberloch Place, Suite C1
The Woodlands, TX 77380
Get Directions
Hours
Hours: 9:00 AM - 4:00 PM
Phone Number: Closed today
Fax: 9:00 AM - 6:00 PM
Full Hours
Contact Us
Our team of experts are here to answer your questions!
(281) 622-4066
Send us an Email
At a Glance
P808453
SALLDHMV8LF808453
1994
255
Black
Black
Four Wheel Drive
Specs
Highlights
The Land Rover Defender, originally known as the Land Rover Ninety or Land Rover One Ten, is a British equivalent of the widely popular American WWII Willys Jeep. It was developed from and replaced the original Land Rover series and was first introduced in 1983. The numbers by which the Defender was at first identified correspond to the length of the rovers wheelbase. However, in 1989 a third model of the Land Rover began production under the name of the Land Rover Discovery, colloquially referred to as the Disco. Two years later in 1991, Land Rover 90s and 110s received the additional title of Defender in order to distinguish them from the Discovery model line. The Land Rover Defender is every bit as well-equipped for versatile and difficult to cross terrain as modern-day American Jeep models while exhibiting a boxier body that has come to be known as distinctly British. This chassis number 808453 is a Defender 110 that has been completely restored from the ground up. The exterior features new doors and latches, windows, hoses and wiring, power locks, custom made skull-embroidered wheels, and custom made light covers. The exterior has also been sandblasted and repainted midnight black. Equipped LED headlights and fog lights will expose off-road trails on even the darkest of nights, and the roll cage and rear glass protection cages make the 808453 tumble-ready in case of a tussle with an elephant, rhino, or especially arduous terrain. Meanwhile, the leather-coated interior imparts riders with ample support for crossing dangerous territory. We would be remiss not to mention the addition of a water crossing intake pump that turns crossing bug-infested swamps into a walk in the park. All things considered, the 808453 is ready and waiting for the deadliest of adventures this world has to offer. Specs: Land Rover 3.5L V8 engine rebuilt, Land Rover 5 speed transmission rebuilt, New clutch, All leather interior, Apple play sound system, Custom-made wheels, 12,000 lb front and rear winches, Kahn design exterior set, Puma hood, Roll cage, LED head lights, fog lamps, under hood lights, Water crossing intake pump, New exhaust system, New A/C system, 2 exterior fuel containers, Back seat TVs.
…
Interested in this vehicle?
This vehicle has many great features, but we understand that you still may have questions. Please use the form below to request additional information and we will respond with all the answers you need.
All pricing and details are believed to be accurate, but we do not warrant or guarantee such accuracy. The prices shown above, may vary from region to region, as will incentives, and are subject to change. Vehicle information is based off standard equipment and may vary from vehicle to vehicle. Call or email for complete vehicle specific information.