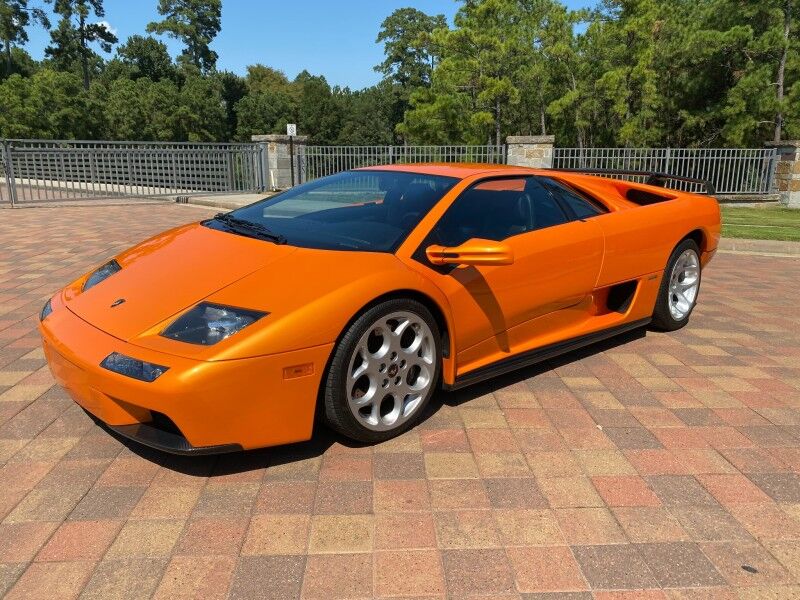 Visit Us
Crave Luxury Auto
2408 Timberloch Place, Suite C1
The Woodlands, TX 77380
Get Directions
Hours
Hours: Closed today
Phone Number: Closed today
Fax: Closed today
Full Hours
Contact Us
Our team of experts are here to answer your questions!
(281) 622-4066
Send us an Email
At a Glance
A12508
ZA9DU01B81LA12508
2001
9916
Orange
Black
Four Wheel Drive
Specs
Highlights
Unlike its predecessors of the same name, the 2001 Lamborghini Diablo VT 6.0 was crafted during the years that its replacement, the Lamborghini Murcielago, was in development. As a result, the VT 6.0 features a unique hybrid design, exhibiting attributes of both its Diablo ancestors and Murcielago descendants. On the outside, the VT 6.0s front bumper sports two large air intakes that foreshadow the Murcielagos own front end decor. The back end of the vehicle remains much the same as other Diablo models, but the tail light surrounds are body-colored (instead of red or black) and the tail light lamps mirror the configuration of the Diablo GT variant. All things considered, the Diablo VT 6.0 is a mishmash of old and new: the best of the past and a hint of the future. This chassis number A12508 is one of few VT 6.0s painted in a gorgeous and exceedingly rare arancio atlas orange. If the prestige of the lamborghini make isnt enough to turn heads, this fabulous color will be. The A12508 is also equipped with a carbon fiber spoiler that appears standard from a distance, but, upon closer inspection, possesses a dazzling ocean blue-tinged shade. Lastly, the retro 5-hole phone dial design wheels provide the A12508 with a detail that reminds onlookers just how far technology has come. Specs 550 hp 6.0L V12 engine, 1.2 bar pressurized water cooling system, 5-speed manual transmission, Lightened carbon reinforced chassis, Four-wheel drive, Brembo servo-assisted four-wheel disc brakes, 18-inch OZ wheels with 5-hole phone dial design, Blue-tinged carbon fiber spoiler.
…
Interested in this vehicle?
This vehicle has many great features, but we understand that you still may have questions. Please use the form below to request additional information and we will respond with all the answers you need.
All pricing and details are believed to be accurate, but we do not warrant or guarantee such accuracy. The prices shown above, may vary from region to region, as will incentives, and are subject to change. Vehicle information is based off standard equipment and may vary from vehicle to vehicle. Call or email for complete vehicle specific information.