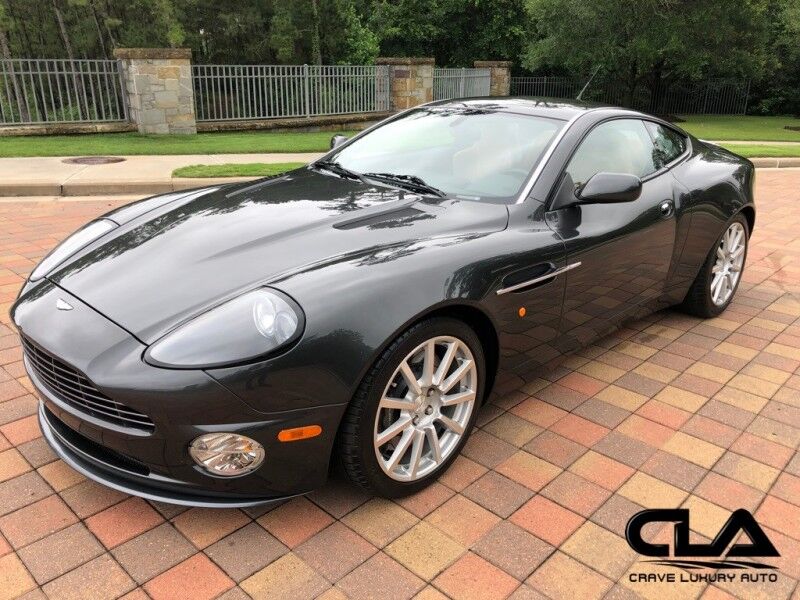 17 Hwy
Actual mileage will vary with options, driving conditions, driving habits, and vehicle condition
Highlights
Originally unveiled at the 2001 Geneva Motor Show, the Vanquish was Aston Martins flagship vehicle up until production ended in 2007. The Vanquish heightened Aston Martins performance benchmarks across the board while maintaining the luxurious grand tourer renown for which the brand is praised. Equipped with a naturally aspirated 5.9L V12 engine and 6-speed automated manual transmission, the car received high marks from critics everywhere in its time and was named the ultimate grand tourer by Road & Track magazine. The first generation Vanquish was also the last car model to be made in Aston Martins Newport Pagnell facility. After disappearing for half a decade, the second generation Vanquish made its initial appearance in Lake Como, Italy at the 2012 Concorso dEleganza at Villa dEste. A new and improved version of the Vanquish, the car took many stylistic cues from Aston Martins limited run One-77 model and would see production up until 2018. This chassis number 502246 is a first generation Vanquish S edition only produced within the limited window of 2004-2007. As such, only 1,086 of these rare vehicles were ever made. In comparison to the original Vanquish, the Vanquish S features a handful of subtle styling revisions. The Vanquish S sports a different nose shape, new wheels, a raised boot lid with a more pronounced integrated spoiler, a small front splitter, and, of course, Vanquish S badging on the rear. The car also comes preloaded with the original Vanquishes optional Sports Dynamic Package, adding revised steering, larger brakes, and a stiffer suspension. Twin bonnet air vents on the hood and sides of the vehicle deliver for performance and aesthetic needs, and side moldings behind each door handle provide the Vanquish with a unique style. The interior is artfully wrapped in decadent Alcantara suede leather that is supple as a babys bottom, and the cars heated leather sport bucket seats are second to none. This is a vehicle that was lovingly handcrafted from the ground up. Anyone who appreciates attention to detail wont find better. Specs: 5.9L DOHC MPFI V12 engine, Manual 6-speed transmission, Twin powertrain electronic control systems, Limited slip differential, Electronic traction control, Rear wheel drive, Twin bonnet air vents, Halogen headlights, Leather wrapped steering wheel, Power heated leather sport bucket seats, Alcantara headliner, Sport Dynamic package, Six piston front / four piston rear calipers, Aston Martin timepiece.
…
Interested in this vehicle?
This vehicle has many great features, but we understand that you still may have questions. Please use the form below to request additional information and we will respond with all the answers you need.
All pricing and details are believed to be accurate, but we do not warrant or guarantee such accuracy. The prices shown above, may vary from region to region, as will incentives, and are subject to change. Vehicle information is based off standard equipment and may vary from vehicle to vehicle. Call or email for complete vehicle specific information.