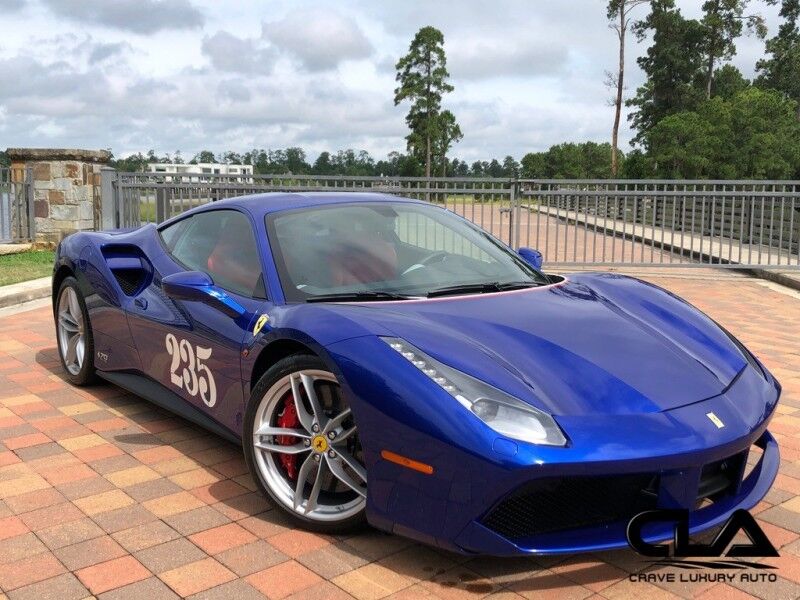 22 Hwy
Actual mileage will vary with options, driving conditions, driving habits, and vehicle condition
Highlights
The Ferrari 488 is the successor to the Ferrari 458 and the first mid-engine Ferrari to feature a turbocharged V8 since the F40. While the exterior of the 488 can mostly be seen as an evolution upon its ancestor, there are some slight and impactful differences. A new front double splitter increases radiator cooling, a newly designed rear spoiler increases downforce, and a larger rear diffuser increases the velocity of air exiting the underbody thereby lowering air pressure. Furthermore, scalloped side air intakes call back to the 308 GTB and serve to redirect air into the turbocharger compressor intake, increasing air pressure behind the vehicle and reducing aerodynamic drag. The 488 focuses on improving airflow with every single detail all the way down to the shark fin door handles, which funnel air into the intakes above the rear wheels. One might be encouraged to think these changes are just for the sake of vanity, but that couldnt be farther from the truth. As a matter of fact, the result of the cars aerodynamic intensive design is an astounding 50% downforce increase over the 458. This chassis number 233579 is a limited edition 70th anniversary Ferrari dubbed the Heartthrob. Its design memorializes the magnificent 1954 500 Mondial, chassis number 0438MD, raced by Phil Hill and owned by John von Neumann. As such, the exterior color is done in a custom royal blue reminiscent of the 500 Mondials own color. It is the singular example of a 488 in this livery. It also comes with a front axle lift and adjustable front light system that further separate it from the rest of the Ferrari pack. The number 235 printed on each side of the vehicle matches the original racing number on the 500 Mondial when driven by playboy Porfirio Rubirosa in the 1954 Santa Barbara road race. Hop inside this princely project and one will find seats done in a red competition-style leather, a neatly black-trimmed interior, and fabulous blue stitching. Additionally, red highlights on the inside complement the cars classic Ferrari red colored seats. The cherry on top? This peerless, one-of-a-kind Ferrari has been driven less than 100 miles. Any collector worth their salt should jump at the opportunity to add this aptly named, heart-throbbing vehicle to their esteemed vaults. Specs: 3.9 L twin-turbocharged Ferrari F154CB V8 engine, Automatic 7-speed dual-clutch transmission, Direct fuel injection, Transaxle, 4-wheel carbon ceramic disc brakes, Front double-wishbone suspension with magnetorheological dampers, Rear multi-link suspension with magnetorheological dampers, 70th anniversary limited edition Ferrari, 1954 500 Mondial tribute car, 6-piston red calipers, Less than 100 miles.
…
Interested in this vehicle?
This vehicle has many great features, but we understand that you still may have questions. Please use the form below to request additional information and we will respond with all the answers you need.
All pricing and details are believed to be accurate, but we do not warrant or guarantee such accuracy. The prices shown above, may vary from region to region, as will incentives, and are subject to change. Vehicle information is based off standard equipment and may vary from vehicle to vehicle. Call or email for complete vehicle specific information.