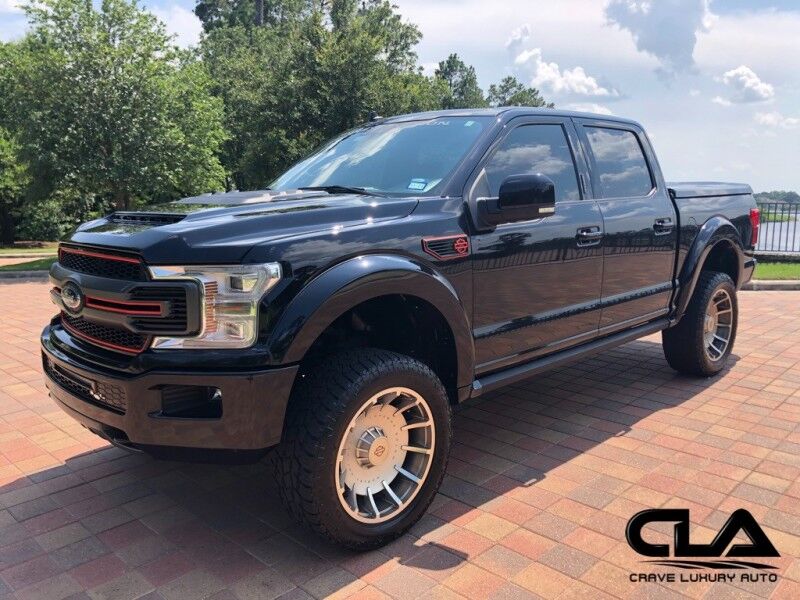 22 Hwy
Actual mileage will vary with options, driving conditions, driving habits, and vehicle condition
Highlights
The Ford F-150 is arguably the most iconic American car ever produced. Its production origins can be traced all the way back to 1948 and it is now in its fourteenth generation of vehicles. The F-150 is the most popular among all F-Series vehicles thanks to its appeal to both commercial and retail consumers. It is the best selling pickup truck in the US since 1977, with no competition in sight. Furthermore, it is the overall highest-selling vehicle since 1981 and also the best selling vehicle in Canada. Ever since Ford Motor Company dedicated 100% of its factories to allied war efforts during World War II, Americans, and indeed the rest of the world, have seen the Ford brand as a symbol of patriotism. That being said, if the F-150s sales records are any evidence, no automaker builds a tougher truck than Ford. This chassis number D05429 has been outfitted with a Tuscany Harley Davidson package bringing its total MSRP to over $99,000. Package highlights include 22 in. exclusive Harley Davidson fatboy style wheels, a BDS suspension, tuned Fox performance shocks, and custom lettering with Harley Davidson badging throughout the vehicle. Honeycomb insert upgrades have been made to the bumper, grille, and hood, and an LED light bar was added to the front bumper for off-road excursions. Power deploying lighted running boards with rock guard trim make boarding this beast simple and the diamond stitch orange on black interior invites compliments from any Harley Davidson enthusiast. Further performance enhancements can be found on the back side of the truck, where a flowmaster performance tuned exhaust with dual billet aluminum exhaust tips keeps the tailgate classy. Lastly, the trucks deep tinted windows provide passengers every measure of privacy, leaving onlookers to wonder how many leather clad, tatted up, and bearded bikers are inside. Jokes aside, this is a unique and tastefully done truck with amazing options and an intact 36k mile warranty to boot. Specs: 5.0L V8 engine, Automatic 10-speed transmission with tow mode, Tuscany Harley Davidson package, MSRP over $99,000, 22 in. Harley-Davidson fatboy style wheels, Fox performance shocks, Harley-Davidson badging throughout, Diamond stitch interior, Honeycomb inserts, Flowmaster tuned performance exhaust, Running boards with rock guard, Deep tinted windows, 3 year / 36,000 mile warranty, LED off-road front bumper light bar.
…
Interested in this vehicle?
This vehicle has many great features, but we understand that you still may have questions. Please use the form below to request additional information and we will respond with all the answers you need.
All pricing and details are believed to be accurate, but we do not warrant or guarantee such accuracy. The prices shown above, may vary from region to region, as will incentives, and are subject to change. Vehicle information is based off standard equipment and may vary from vehicle to vehicle. Call or email for complete vehicle specific information.